Would you like to test out different scenarios in your life and measure which one results in the best outcome? While that’s impossible in real life, it’s perfectly possible when it comes to Facebook Advertising. In this article, we are going to cover the basics on how to A/B test Facebook ads, shed some light on the key questions that arise regularly and try to answer them in the most comprehensible way possible.

A/B testing, or split testing Facebook ads simply involves putting two or more versions of one variable against each other with the purpose of establishing which is the most effective and resonates best with your target audience. You can A/B test ad format, ad copy, headlines, images, target audience or placement.

In other words, you essentially set aside your gut feeling as to which kind of creative, ad copy or targeting will work for your Facebook ad campaign and let the audience decide instead, based on their reaction and feedback. Rather than choosing to show your audience a video ad over an image ad because, well, everyone out there claims that videos are trending now, you put both versions in front of them and see how they respond to them after a certain amount of time.

The purpose of A/B testing your Facebook ads is not only to increase your conversions by using the best performing version, but also to gain valuable insight into your potential buyers’ behavior and use this insight across all your other marketing campaigns.

2. Which Elements of Your Facebook Ads Should You A/B Test?

Theoretically, you can test any element you want, from the color of a CTA to audience age or gender. It all depends on your hypothesis – that is, the conversion problem you’ve identified, the potential solution you have come up with and how that change would positively impact the conversion problem.

Suppose you have identified that your ad has a high impression rate and therefore the click-through rate is low. As a result, you build a hypothesis which states that if you change your CTA text, the CTR will increase. Now you need to test and validate this hypothesis, don’t you? To achieve this, you A/B test one variable – CTA copy – while leaving all other variables the same. If the second version of the CTA wins over the original one, then your hypothesis is proved to be true.

You might choose to A/B test your Facebook ad campaigns from the very beginning, when you’re yet to have any real idea as to what best resonates with your audience in general. Therefore, every ad campaign you run can be A/B tested – you can test audiences, ad copies, ad formats or ad designs until you find your winning set of variables.

The split testing elements fall under the following categories:

Here are some A/B testing ideas for you to get inspired and start your next test.

3. How to A/B Test Facebook Ads – Manually or Automatically?

Not long ago, when Facebook ads were just picking up steam, advertisers had no other option when it came to A/B testing than to do it manually. They would manually duplicate the control ad multiple times, just changing one variable, and then check the metrics like conversion rate, CPA or ROAS to determine which version performed best.

Understandably, manual A/B testing had its limitations; apart from being time-consuming and messy, there was also a risk that audiences would overlap, thus skewing data. In later years, some tools were created which solved these limitations and automated the whole process. In 2017, Facebook also natively released its Split Testing feature to allow advertisers to accurately test different components of their campaigns and obtain easy-to-understand results.

Now you can select which ad element you want to split test, then you are prompted to test up to 5 versions of your chosen variable, schedule your test duration and, at the end, obtain an accurate report on the test performance. To conduct accurate tests, Facebook organizes the structure to be one ad per ad set so that the audiences do not overlap and provides an option to choose between even split and weighted split of the budget.

4. When Should You Start to A/B Test Your Facebook Ads?

You can start A/B testing your Facebook ads at any time, whether you’re just starting your business promotion and want to collect as many insights as possible or are stuck in the middle and want to improve your results.

5. Should You Test One Variable at a Time or Conduct Multivariate Testing?

All sources recommend that you test one variable at a time when A/B testing Facebook ads. Even Facebook’s native split testing tool doesn’t allow you to select more than one variable when testing: for example, you can’t test both creatives and audiences within one campaign because you won’t be able to figure out what change affected the results. However, you can test up to 5 versions of the same variable.

But what if you’re ready to launch yourself into more complex experiments and want to test all combinations of audiences, creatives and placements within one campaign? While it would be a real headache to run multivariate testing on Facebook Ads Manager, there are some easy-to-use third party tools out there like Adscook that resolve this issue.

Adscook’s A/B testing feature allows you to conduct multivariate testing with ease. You can use all combinations of audiences, ad images, copies, devices, etc., and find the best converting ads. Let’s say you want to test two different audiences, three different creatives and two different placements – 2x3x2. Adscook will automatically generate 12 ad variations using all the possible combinations and help you find your best-performing set of variables. Want to see it in action? Sign up now and start 30-day free trial with Adscook.

The budget for your A/B testing campaign largely depends on how many versions you are testing. The more versions there are, the more budget you should allocate because you will need a sufficient number of impressions and conversions to determine the winning ad.

However, if you’re just starting out and don’t yet have enough data, you can always call on Facebook and use the recommended budget it provides.

But if you want to take control of your budget, here is a simple formula to help you calculate your ideal A/B testing budget:

Suppose that your product average cost per conversion is $5, your number of split testing variations is 3, and your number of conversions needed is at least 50-100 per ad variation. This gives the following result:

In this case, you’ll need a budget of $1,500 to run a successful A/B testing campaign. If you choose to spend your budget daily, it will be spread across the number of days you have set. For example, if you’ve set the duration at 10 days, your daily budget will be $150.

The recommended time frame is at least 1 day and no more than 30 days because one day is not a sufficient amount of time for Facebook to learn the data and come up with conclusive results, while 30+ days would simply be a waste of your budget as it is more than enough time for Facebook to identify the winning version and conclude the testing.

If you’re not sure about the ideal duration for your A/B testing, it’s always safe to start at 4 days. However, it all depends on your business and audience size, so think about your own circumstances carefully and don’t just blindly follow this recommendation if you know that the buying process for your product is longer.

Another question linked to Facebook A/B testing is how large your audience should be in order for your campaign to run successfully. If you are targeting a very niche audience, such as women aged 25-30, living in London and interested in luxury jewelry, your audience might be very small if you were planning to conduct many tests.

You need to remember that the audience is split among all versions and if it’s too small, the reach will be low and the spend will be high accordingly. In this case, therefore, avoid testing many versions, or otherwise increase your audience size for more effective testing. As a rule of thumb, an efficient size per audience is between 200k-1MM.

Another thing to keep in mind is to make sure not to use the test audience in other campaigns so as to avoid audience overlap and gain accurate results.

9. How is the Winning Ad Set or Ad Determined?

Facebook determines the winning ad or ad set by comparing the cost per result for each one based on your campaign objective. It also provides a confidence level that shows how likely it is that the ad would perform in the same way if you ran the test again. Therefore, the cost per result and confidence level combine to determine the winning version.

If you’re using Facebook’s Split Testing tool, you will see the test results in the Ads Manager reporting table; the winner will have a star icon next to it. You will also receive a report via email, which details the results (the number of times your ad set or ad got the result associated with your campaign objective), cost and amount spent.

10. What Actions Should You Take after Reviewing the Facebook A/B Test Results?

So, you’ve successfully split tested your ad campaign and determined the winner, but now what? What are the next steps to help you to get the most out of the testing results? Here are some post-testing strategies that will help you further improve on your results and reap more benefits.

Once the winning version is determined, the campaign stops running and so too does your winning ad. You can reactivate it straight from Ads Manager, but be aware that Facebook will restart its learning phase if you keep the ad paused for longer than 7 days.

#2. Create a new ad from the winning ad set with an increased budget

This is one of the most successful Facebook ad scaling tactics. However, make sure to avoid making big budget increases; otherwise, this will cause an ad set to re-enter the learning phase. It’s advisable to increase your budget by no more than 15%-20%. You can even go further and make incremental increases every 3-4 days.

Let’s assume you were A/B testing an image vs video and the video emerged as the winner. Now you can narrow down the testing within the video, for example by testing the video value proposition, its CTA and so on. You can target the same video at different audiences to see which best resonates with your video, or test it on different placements. There are plenty of ways to play around and experiment with testing and hit the bullseye.

We hope this post answered your basic questions on Facebook A/B testing and will help you take your experiments further.

Do you have a specific question that we haven’t addressed here? Please feel free to share it with us in the comments below. 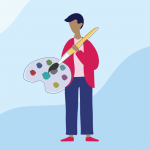